Is Leveraged Breakthrough System a Scam? – What You Should Know

In this review I will be taking a levelheaded approach and explaining the system thoroughly. Can you make money with the system? Yes, you absolutely can… However the system is nowhere near as amazing as it sounds. The promotional material I’ve seen for it seems to be pretty misleading.

The system is promoted as a way to generate $1500-$10,500 and higher from people “eagerly sending you cashier’s checks”. Furthermore they tell you that you do not have to sell anything to anyone. All you do is “plug in” to the system and much of the work is already done for you.

Sounds a little bit too good to be true doesn’t it? I mean why would anyone be giving away the system that can generate hundreds of thousands of dollars per year? Wouldn’t it be better just to keep it for themselves?

Well the truth is that there is a massive catch to this all, which shall be going over shortly.

Overview of The System

After watching the video presentation for this system there is a good chance that you don’t really know the full scope of what’s going on here. And this is not your fault. The reason you might not be aware of how this all works is because you have been led astray. They only tell you the good sides of the system and not the bad.

In a nutshell, this system is one of those opportunities that you buy into to make money online and then you make money online by selling the same darn system to other people. What you will be doing is selling high ticket products that cost thousands of dollars in this is how you will have the opportunity to earn such massive commissions going up to over $10,500

There are four different levels that you can buy into the system at, gold, platinum, diamond, and ultra Royal. The prices are as follows:

What Do You Get For These Massive Prices?

Leveraged Breakthrough System has products for personal development, sales and marketing, and leadership training. These are digital products that you will simply get access to online.

In addition you will also get access to the system where you can promote Leveraged Breakthrough System two other people and earn commissions when they buy in. You will get a duplicate website that you can funnel people into along with lead tracking and a few other things.

When you buy into the system you will pay the person that recruited you in, aka your sponsor. You will pay that person the cost of the membership level you are joining at and then there is the admin fee that you also have to pay.

Then… When you go out and recruit other people and they will pay you directly depending on which membership level they are joining at. So how it works is members of this system get to keep the majority of the money in the admin fee goes to keeping the system running.

The catch to this system is that you first have to buy in before you can make any money promoting the system to others and you will only be able to earn money off of the membership levels that you are either a part of or higher than. So for example if you are at the Gold Level I and recruit someone in who joins that Platinum Level II then you will not earn any money off of that recruit. You would’ve had to be a Platinum member or higher to earn the commissions there.

This is where they get you. You are already going to be forced to whip out and spend a lot of money initially but then later on you will pretty much feel forced to upgrade your membership and spend a bunch more money. This is the same type of deal as Big Profit System and similar to other digital marketing systems like MOBE and Aspire, which just got shut down by the SEC by the way.

Are The Products Really Worth The Price?

Heck no. Would you buy some PLR digital product for $3k -$ 21k that provides information that can easily be found online for free? The answer is no. And the reality is that is what you are getting here. The products are more than likely PLR products, which means that the creators of this system bought them off of someone and then just re-branded them as if they are their own creations.

Trust is obviously already an issue here because of the misleading sales tactics they throw at you, making the system seem like the greatest opportunity ever. However, there is more than just this. You should also know that all of those videos of people ranting and raving about how great this system is are completely fake.

How do I know? Well because I have seen the people in these videos more than once. These are paid actors that anyone can hire online to make short videos like these… Fake testimonials. Below you can see the one woman from the video presentation to the last and then to the right you can a listing for one of her services on Fiverr, which is a freelance website were you can go to pay people to do things like this among many other things… 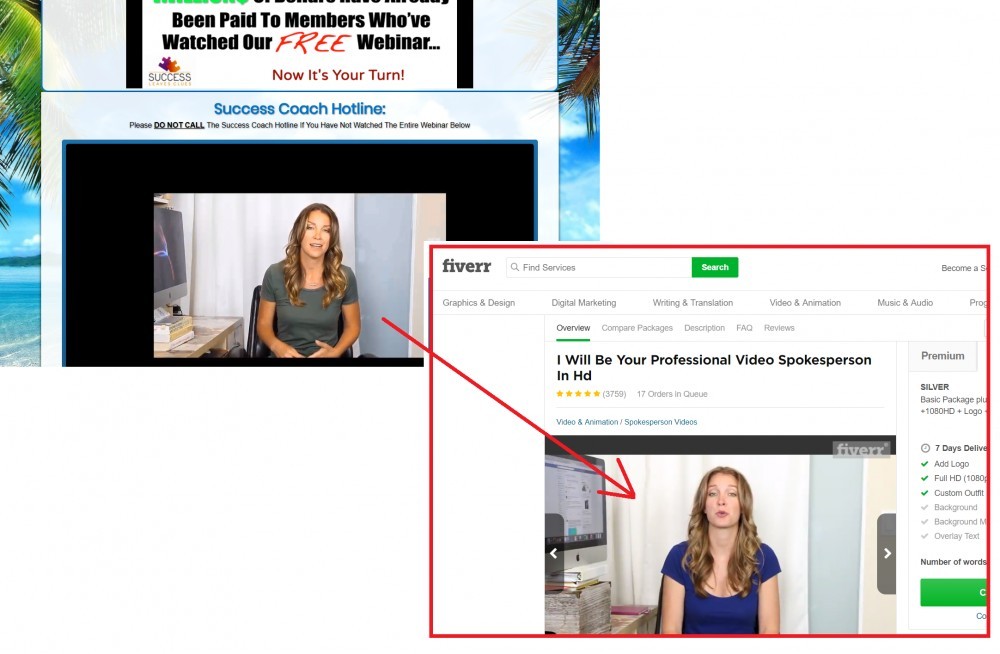 Final Thoughts – Worth Joining? No

Can you make money with this system? Absolutely…. but will you? There is a good chance you won’t and then you are screwed because you just spent a minimum of $3247 buying in.

Overall this is a system I would strongly recommend against. First of all, it is extremely expensive just to buy into and out of the price range of many people looking to make money online. Seconds of all, you are going to have to live with yourself promoting these junk products to others all for the sake of earning massive commissions. And third of all, I have seen many systems like this before and they tend to come and go with the seasons. I’m willing to bet that this system will not be around very long. It will likely run into troubles and maybe even get shut down by the government.

If you are looking for a way to make money online that is actually legitimate, then I would recommend taking a look at my number one recommendation below. I have been making money online doing this since 2015 so I can personally say that works from my own experience.

Please leave any comments, questions, or concerns that you may have below and I’ll get back to you as soon as I can 🙂 Your opinion is important to me and I would like to know what you think about this system also.