Is Christina’s Copy and Profit System a Scam? – What You Should Know 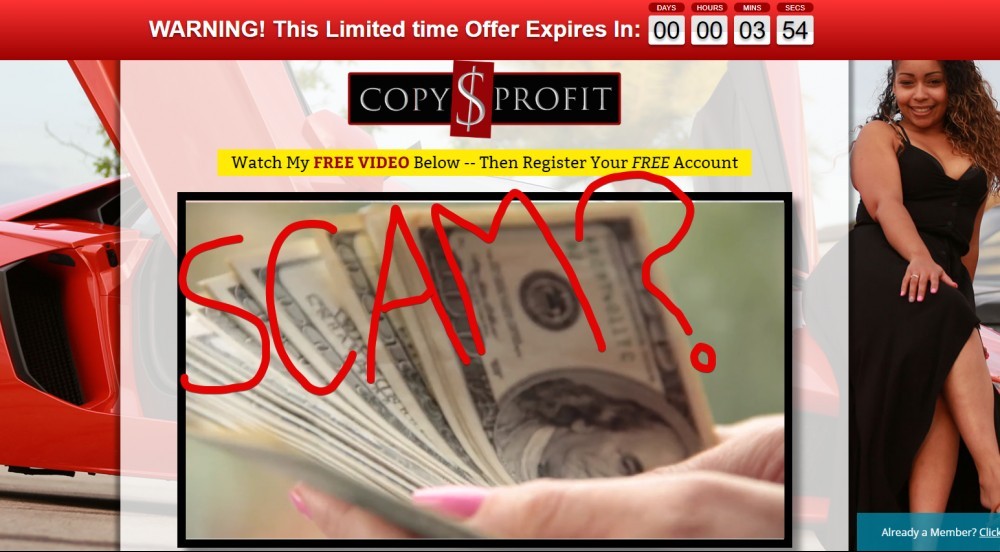 There is this new “make money online” system being promoted online called the Copy and Profit System, which was created by woman named Christina. She claims that she is making thousands of dollars a day with it, as well as others, but is this system really as amazing as people are saying it is? After all… It is not like we haven’t heard plenty of other systems that claim to make you thousands of dollars which turned out to be scams.

So is this the real deal or is Christina’s Copy and Profit System a scam?

In short… I wouldn’t call this a full-blown scam, but I would say that this is definitely a bit “shady” and lures people into it all in a misleading way. If you saw one of the video presentations for Copy and Profit then you are likely not fully aware of what is really going on here. Why do I say this? Well, because in the video presentation you are kind of led on and on with a bunch of overhyped information, but aren’t really given much detail on it.

In this review I will be going over what this system really is and what you absolutely need to know about it.

There our several different video presentations for this system, but the one that I came across looked like this… 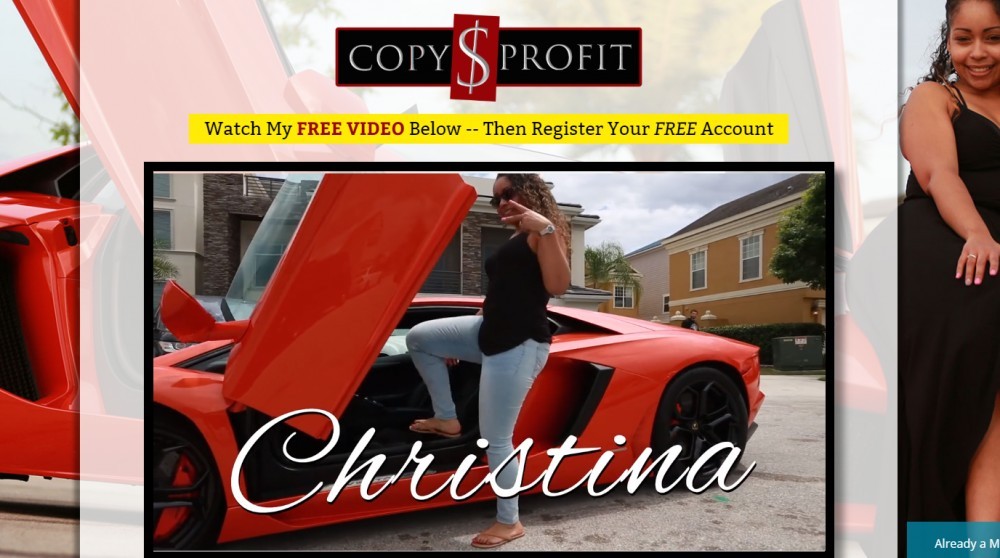 The video presentation started out with a bunch of people talking about making tons of money with this system, who have supposedly been using it. Some people claim to be making thousands of dollars per day with this.

As I’ve mentioned, the creator of this system is named Christina, and she claims to be making an absolute boatload with it. At one point in the video presentation she shows her bank account and how she has made over $170,000 in the last month. There are also clips played in the video of her counting money, showing off her sports cars, living in a mansion, and a bunch of other crap.

To be honest, this video presentation starts out like pretty much every other get-rich-quick scheme ever, like Quick Cash Method, Affiliate Millionaire Club, you name it. She talks about how she is able to work whenever she wants, take off whenever she wants, has plenty of money to do whatever she wants, and of course she claims that this is “copy and paste simple” and that “the profits can start coming in instantly”.

In the video presentation that I watched she went on to talk about how she used to be a bartender that was struggling to get by, being a mother of five and all. She looked for ways to make money online but the problem was that they all costed so darn much to get started with.

But guess what??! It only costs one dollar to get started with her system!! HOORAY. Finally a system you can make thousands of dollars with that costs less than a pack of Orbit chewing gum.

But guess what?… Of course there is much more to this than what she tells you. The fact of the matter is that this is going to cost you much more than just one dollar, as you will see.

What You Are Really Buying Into

The Copy and Profit System that Christina has created is really just a sales funnel to get people to buy into a program called Copy Profit Success Global, or CPS Global for short.

What The Heck Is CPS Global?

CPS Global is a Forex trading education platform that anyone can pay to become a member of and receive live online trading sessions, trading webinars, access to trading tools, and so on. It is all about trading FOREX, which stands for foreign exchange and this is where you trade foreign currencies back and forth for a profit… Or hopefully a profit if you are good.

They claim that the training provided in Forex trading has resulted in a Beta test group growing their accounts an average of 11 to 17% per month, but I have my doubts on how great the training actually is.

Why my doubtful? Well because they tell you that it is super easy and that members will be able to see exactly what the professionals are doing, being able to look over their shoulder as they buy/sell so that they can do the same. The problem with this is that if everyone were to make the same trades than these trades would become less and less profitable. This is absolutely not a sustainable trading method, especially with how much CPS Global is being promoted all over the place online.

But anyways… As a full disclosure I have not actually buy into CPS Global and have not tested out there Forex trading training for myself.

Why Is This Being Promoted So Much?

The reason that CPS Global is being promoted so heavily online is because it is a MLM company, which means that it pays to recruit others in and also when they recruit others in, and so on.

The company was founded by Joel Santiago and Joe Otis, who have been involved with MLM network marketing companies for years.

The goal with CPS Global is to join in in then become an IBO, or independent business owner, and promote the system to other people. They really seem to push you harder than they probably should be to become an IBO.

And as an IBO you will be able to earn from their MLM, multilevel marketing, compensation plan. They have it set up in a 3 x 9 matrix where there are 3 positions on each level and you have the ability to earn down to 9 levels deep.

This is the reason that Christina is promoting CPS Global and why she is giving you her funnel system to promote it as well, because she will also earn from your recruits. 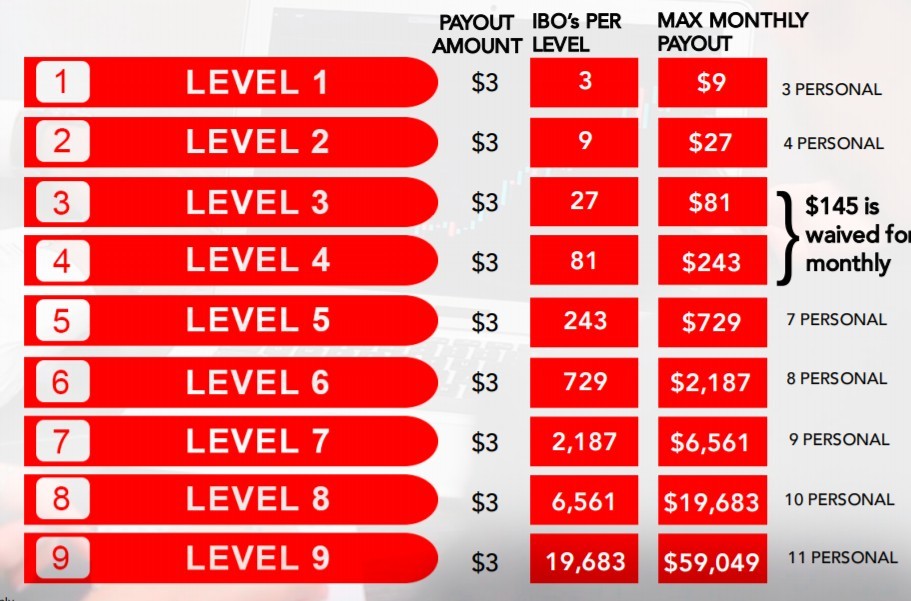 In a Nutshell How This All Works

Ok… So you are funneled through Christina’s Copy and Profit System to buy into CPS Global. The goal then is to promote the Copy and Profit System to other people, who will also be funneled into CPS Global just as you work. They will watch the video presentation of her with sports cars, counting money, etc. and then will be told to join CPS Global so that they can make tons of money online.

Here is how the funnel system works step-by-step… 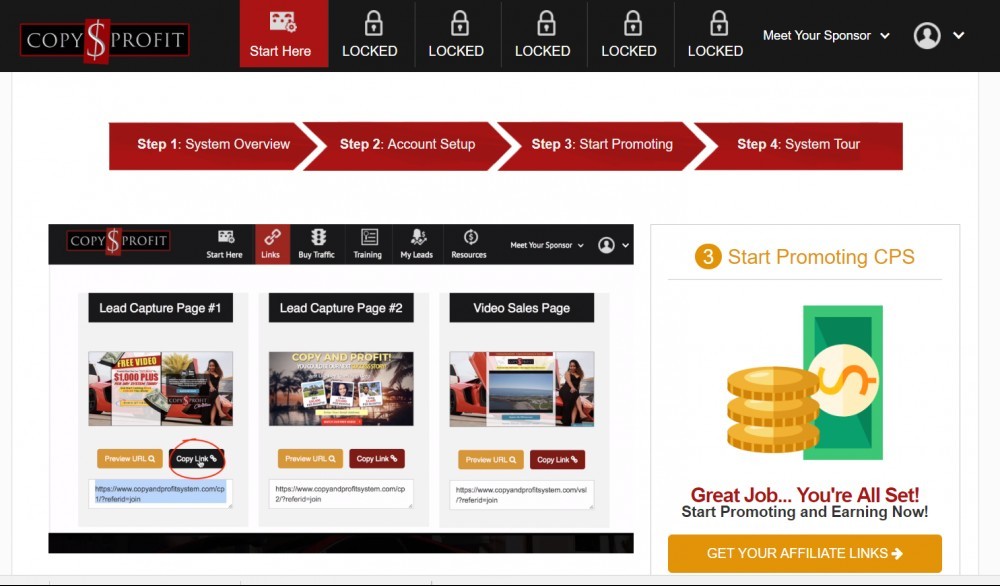 Sounds Amazing Right?.. Not So Fast

While you can make money with this opportunity promoting CPS Global, this is not nearly as amazing as it seems.

First off, the cost of it being $1 that Christina talks about is just for a trial.. The real prices are as follows… 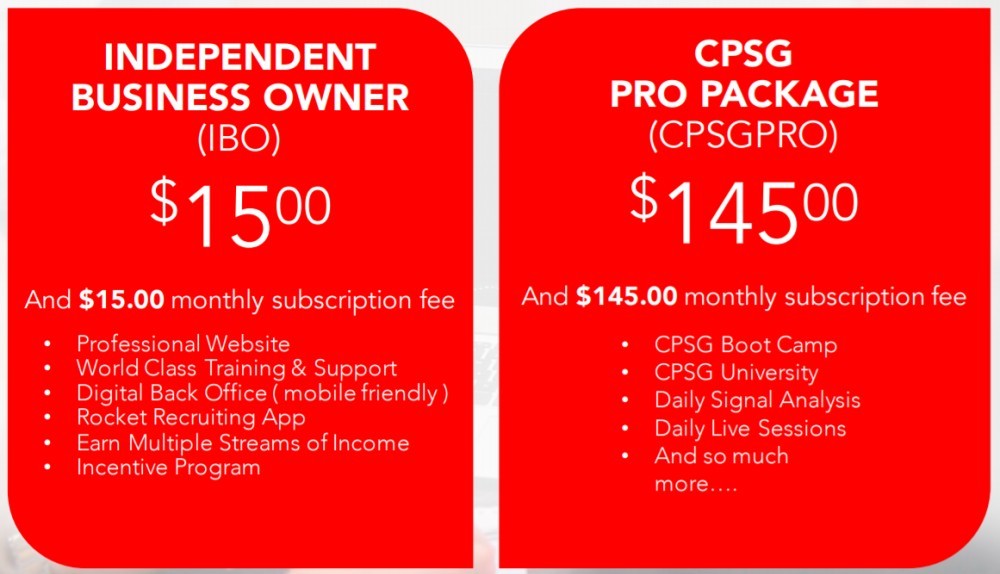 And these prices must be paid on a per month basis as long as you are a member.

The reason that MLM’s are so difficult to make money with, which is also the reason why they have such extremely high turnover rates, is because of that they are a pyramid -like structure. MLM’s have multiple levels, hence the name multilevel marketing, where money flows up the pyramid like structure from the bottom to those at the top. It is great for those at the top, but of course most people that are members or going to be at the bottom where they are just ending up getting the short end of the state, having money sucked away from them and funneled up to those above them.

I review MLM opportunities all the time and a common theme that I find with them is a very uneven income distribution. Only a small percent of the people involved in these business opportunities actually make good money… All thanks to their pyramid like structure.

Final Thoughts – Scam? Should You Join?

This whole thing definitely is a bit on the scammy side. Christina’s sales funnels sucked people in without really giving them a good idea up front of what they’re getting into and the whole opportunity here, CPS Global seems to be more focused on the MLM network marketing side of things than the actual Forex trading education, which is what it is supposed to be all about.

But anyways… Who am I to give my opinion. We all have our own opinions and you may think this opportunity is great. I however do not and do not recommend it based on my experience in what I have seen from similar opportunities.

If you want to know an opportunity that I do actually recommend then I would suggest this program, which I joined back in 2015 when I first started making money online. To make a long story short… I’m now making over $6000 a month online which goes to show that it does work.

I hope you liked my review and found it helpful. There is a lot of misleading information out there and a lot of people are likely buying into this system without really knowing what they’re getting themselves into. Hopefully I helped a few people avoid this at the very least.

Please leave any questions, comments, or concerns below and I will get back to you as soon as I can 🙂