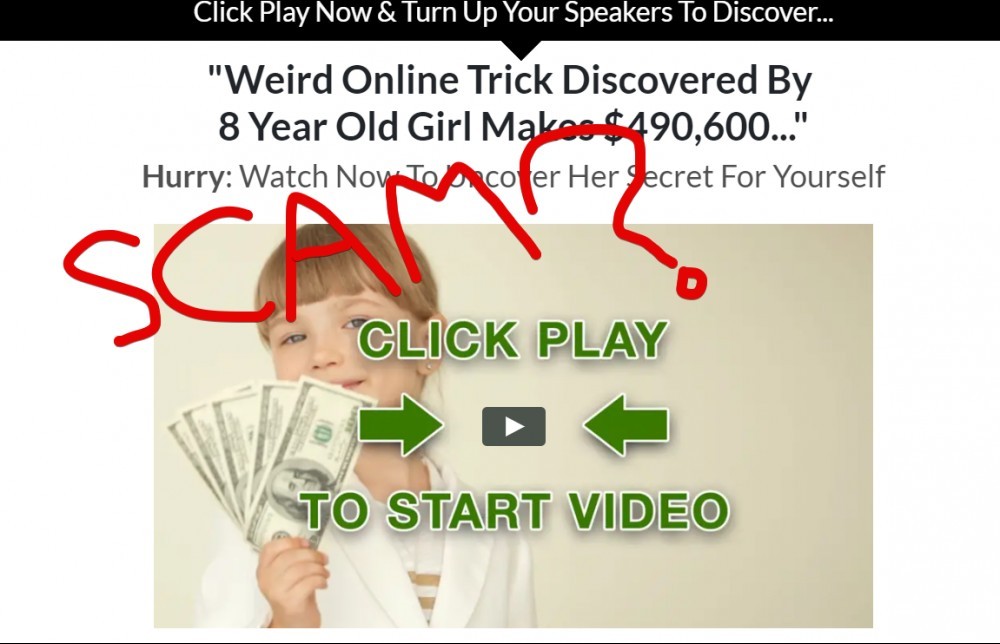 Get The Discovery (at GetTheDiscovery.com) is a website that promotes some opportunity to make money online, that is supposedly incredible and super easy. In fact… The spokesperson says that it is so easy an 8 year-old girl made 490,600 with it in one year. But is this really all true? Or is this just another scam that is going to leave you with less time and less money than when you started?

In this review I’ll be exposing this website for what it really is, which is nothing like you are led to believe. While you are told that this is a one-of-a-kind opportunity that you need to jump on right now, the reality is that it is not. If you are possibly thinking about buying into this you are definitely going to want to reconsider. If you do buy and you will likely just end up with less money than when you started.

When you land on the Get The Discovery website you are greeted with a video presentation. The title of the video presentation is “weird online trick discovered by 8 year old girl makes $490,600…”. The entire video is based around some eight-year-old girl coming across this “secret” to making money online.

The girls name is supposedly Alina Morse who is from Oakland County Michigan. The spokesman, the guy talking in the video, claims that the same thing that happened to the girl happened to him as well. They both came across this online secret enter supposedly making thousands of dollars each day, on autopilot of course.

Right off the bat this whole thing sounds like a scam to me and I am sure you were thinking the same thing. It is obvious that you were at least somewhat suspicious of this opportunity… Which lead you to doing some extra research and eventually lead you to my website here.

It reminds me of the get rich quick schemes i have reviewed recently including Secret Income Club and Point and Click Profit.

This “weird online trick” or “secret”, as it is sometimes referred to, is supposedly some “forgotten” mainline of cash that people are tapping into… Whatever the heck that is supposed to mean.

But anyways… Of course you “must pay attention and act fast”. You are told that if you click away from the page you will forfeit everything… You won’t have a chance of getting this special opportunity again. As expected this is complete BS. I know this scam has been around for quite a while already and you can easily exit out of the page and come back to it tomorrow if you want to, or the next day and so on.

I’ve been reviewing online scams for quite a while now and have learned a lot from my research. I know what to look for to differentiate between a scam and a legitimate online earning opportunity.

As a rule of thumb, if something sounds too good to be true then it probably is. I know this is pretty much common sense but you would be surprised how much this common sense saying can save you from getting scammed.

Making $490,600 in a year… As a eight-year-old girl??!! Yeah… That sounds too good to be true and so does everything else about this opportunity.

Below I’ll be going over some of the red flags that caught my eye and that you should be aware of. All of these point to it being a big old scam…

The girl in the video is supposedly Alina Morse from Oakland County Michigan, but as you have probably guessed… This is nothing more than a lie. I did some searching around online and found that this is a short video clip of a girl holding money that anyone can purchase online on the stock photo website DepositPhotos… 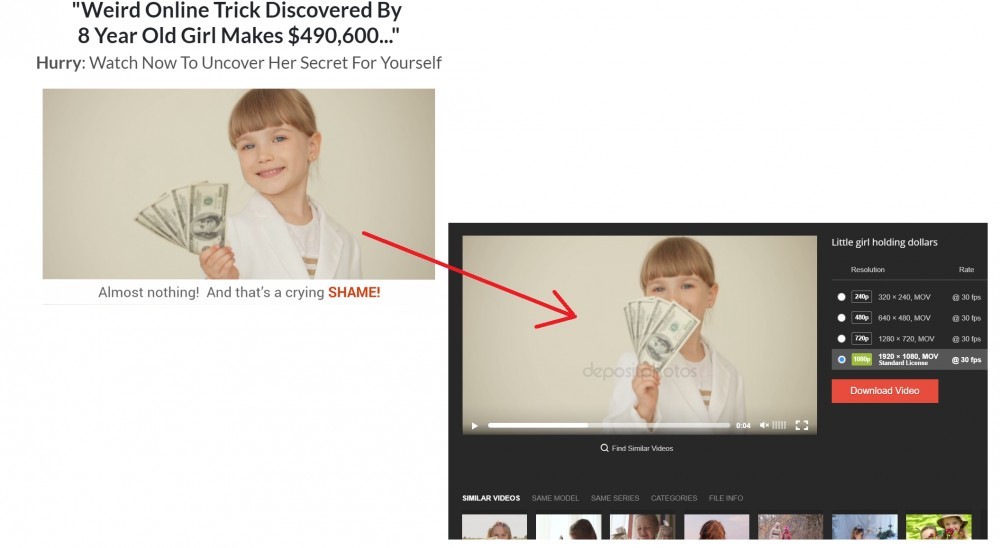 The whole story about this girl was made up likely.

Just as the little girl is likely completely fake, Ron Porter is also a probable fake.

Ron Porter is the spokesperson in the video. He claims to have three kids and to have used to work as a teller at a bank. He talks about coming across get-rich-quick schemes and “bogus lies and fake income screenshots”. Then of course he came across this secret method at a family get-together where one of his relatives was talking about this eight-year-old girl that was making all this money online.

Why is all of this likely fake? Well because there is nothing that I can verify. Ron Porter does not give a picture of himself that I can look up, there is no sort of verifiable information given and it is very common for scams like this to be promoted under fake names, because of course the real people behind them don’t want their names known.

#3 – Paid Actors Claiming To Make Money With This

Remember the part of the video presentation where there were short video clips from people claiming to have used this incredible system? Yeah… Well those are all fake and you can’t trust any of them.

The guy below claims that people are making $500-$1000 per day and that he thought it was impossible at first. Then of course he did exactly what they said in the program and now he is making tons of money to. But as you can see below, this guy is a paid actor that anyone can hire on the freelance marketplace called Fiverr. I recognized him immediately because I have seen his fake testimonials and multiple other online scams…

By the way, at the top of these testimonial videos it does say “real testimonials, actor portrayals”, but I doubt that the testimonials are real in the first place. It is likely all a complete lie.

What This “Secret” Is and How This All Works

Okay… So how does this program actually work? What is this “secret” that is going to make you tons of money?

The spokesman talks about how all you have to do is set up your profile, go through the training steps, activate the software, and “the rest is history”. It is supposedly super easy and is all done for you with a single page

Makes perfect sense right? The answer is No… It doesn’t make any sense. This is a very common sign of a scam. They will talk a bunch and make the opportunity sound incredible, but when you try to make sense of it you can’t.

Later on in the video he explains again how it works…

His Explanation of How It Works:

Wow… That is it… All you do is faulty directions, get the training, and “press go”. Sounds easy enough… Now wonder why an eight-year-old girl could do it.

But as you and I are both well aware, this still makes absolutely no sense. He is very vague with what he tells you and doesn’t give you any real details about what is going on here.

He says that people will give you money in exchange for products that they want to buy. All you have to do is get the page under your name and after that the system will do everything for you.

What The Heck Does This All Mean?

Honestly I don’t even know what to tell you at this point. I have been working online since 2015 and have done affiliate marketing, e-commerce, PPC ads, Facebook advertising, and a variety of other online marketing stuff but this makes absolutely no sense to me.

I have no idea what he is saying and I don’t think anyone can make sense of it. He is likely being extremely vague on purpose because that is how scams usually work. They usually make you buy in before finding out what is really going on, because of course you wouldn’t buy in in the first place if you knew the program/system was a scam.

Nothing But a Get-Rich-Quick Scheme

This is pretty much your typical get-rich-quick scheme. The scammers behind this lure people in with the hopes and dreams of making fast cash online. Of course the program is priced very low and this is all because the creator is a great person… A philanthropist who is doing this all just to help out other people.

Everything I see about this program points to it being a scam.

So obviously I am not going to recommend Get The Discovery. You are free to do what you wish, but I can guarantee that you are going to be disappointed if you do end up buying into this. There are a lot of good opportunities to make money online out there, this just is not one of them.

If you are a beginner looking to make money online I would suggest taking a look at this program. I joined this program back in 2015 which was when I first started researching ways to make money online. To make a very long story very short, I now make a living working online and this goes to show that the program does work. But anyways… I am not going to get into detail here. You can click the link below to learn more…

Questions or comments? Just leave them below in the comment section and I will get back to you as soon as I can 🙂